Environmental and political problems created by our dependence on fossil fuels combined with diminishing petroleum resources are forcing society to search for renewable sources of energy. Plant biomass is the only current sustainable source of organic carbon, and biofuels, fuels derived from plant biomass, are the only renewable source of liquid fuels. Currently solid lignocellulosic biomass resources are significantly cheaper than petroleum (at $15 per barrel of oil energy equivalent) and abundant (have the energy content of 60 % of our domestic crude oil consumption). While biofuels have a tremendous potential to alleviate problems caused by fossil fuels, the major impediment to utilization of our lignocellulosic biomass resources is the lack of economical processes for conversion of biomass resources into fuels. The goal of the Huber research group is to develop the clean technology that will allow us to economically use our biomass and other sustainable resources for the production of cheap renewable gasoline, diesel fuel, jet fuel, and chemicals.

Whereas the petroleum industry has made continuous progress over the last 100 years by studying and improving petroleum chemistry, biorefining is only in its infancy. Biomass-feedstocks are significantly different than petroleum feedstocks because of their high oxygen content leading to low thermal stability and a high degree of functionality. The major scientific challenge is how to efficiently and selectively remove oxygen from biomass-derived molecules and to functionalize this feedstock into the targeted molecules that are compatible with petroleum based liquid fuels. Heterogeneous catalysis and chemical engineering hold the key that will allow the efficient conversion of biomass-derived molecules to fuels. Understanding and controlling this chemistry allows the efficient utilization of our vast domestic biomass-resources.

The Huber research group is developing new generations of catalysts, reactors, spectroscopic and imaging tools, and computational models that are essential for understanding and controlling the chemical transformation of biomass-derived oxygenates to fuels. The main research thrusts are the development of economical processes for the production of renewable gasoline, diesel fuel, jet fuel and petrochemicals. In this respect, we are developing clean catalytic technologies for the production of the full spectrum of products that are currently derived from petroleum-derived feedstocks, from renewable lignocellulosic biomass feedstocks. A number of these technologies are moving rapidly towards commercialization. Professor Huber has authored over 155 peer-reviewed publications including three publications in Science.  He has more than 17 different patents several which are licensed to different companies.  According to Thomson Reuters he is a highly cited researcher in the field of chemistry, which is an honor given to the top 1% most cited chemists.  He has been cited over 3,975 times in 2017 and over 25,911 times in his career.

The Huber research group uses a wide range of chemical engineering tools to understand and optimize biomass conversion to fuels and chemicals, including: heterogeneous catalysis, kinetic modeling, reaction engineering, spectroscopy, analytical chemistry, nanotechnology, catalyst synthesis, conceptual process design, modeling of transport phenomena, and theoretical chemistry. These tools have been combined to develop a number of catalytic technologies for the production of clean fuels and chemicals.

Demands for transportation fuels are on the rise, as is global warming which the United Nations has warned may lead to a critical 1.5°C increase in temperature above pre-industrial levels by 2040. Biomass shows promise as a feedstock to address these concerns [1,2] as it contains the carbon necessary to produce drop-in fuels, is abundantly available at low cost, and captures some of the CO2 emitted during fuel combustion in its growth. The Huber group has studied various processes for the conversion of biomass to fuels, developing new technologies and resolving fundamental limitations in these transformation processes.

The Huber group has studied Catalytic Fast Pyrolysis (CFP) to convert solid biomass to green gasoline at low cost [3]. From this process, which most generally involves the rapid heating of biomass in the presence of an acidic zeolite catalyst, we founded the company Anellotech in 2008, which focuses on the production of BTX (benzene, toluene, and xylene) for use in fuels as well as chemicals. Additionally, we have elucidated the chemistries behind the hydrodeoxygenation of sugars [4], a key step in the production of gasoline-range paraffins and mono-functional distillate fuel precursors from sugars. Alternatively, we have examined the selective direct transformation of biomass to alcohols through decomposition and hydrodeoxygenation in supercritical methanol over mixed metal oxide catalysts [5]. Our studies have shown the critical role of methanol incorporation and aldol condensation chemistries in this process. We have also explored the catalytic upgrading of biologically-produced platform molecules, such as ethanol (the most widely used biofuel in the world) [6]. Current research in this area focuses on the conversion of ethanol through direct alcohol coupling via Guerbet chemistry. Our work is additionally informed and rationally guided through technoeconomic analyses performed in collaboration with other research groups in the University of Wisconsin Madison Department of Chemical and Biological Engineering [6]. 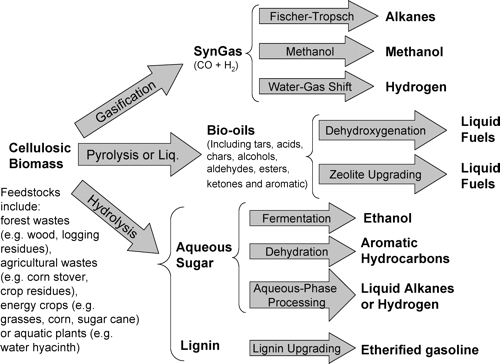 Strategies for the production of fuels from lignocellulosic biomass [1,2]

Our group has done extensive work in the catalytic conversion of lignocellulosic biomass to chemicals. Oxygenated chemicals utilize the inherent functionalities present in biomass, and are higher in value than fuels, allowing for profitability at smaller scale. Co-production of bio-chemicals such as polymers, solvents, and surfactants, could significantly decrease the cost of lignocellulosic biofuels, leading to economically viable bio-refineries.

We have shown that cellulose can be converted to levoglucosenone (LGO) in up to 50% yield using a polar aprotic solvent and acid catalyst [1]. The selectivity to LGO versus hydroxymethylfurfural (HMF) can be tuned by controlling the water content of the solvent system. LGO can then be converted to a variety of valuable products over metal and acid catalysts [2]. Reaction pathways for LGO conversion were elucidated using reaction kinetics, isotopic labeling, and quantum chemical calculations. We investigated a PtW/TiO2 catalyst to synthesize the commodity chemical 1,6-hexanediol from LGO and HMF [3]. Catalyst characterization showed that H2 spills over from Pt nanoparticles to reduce WOx moieties, forming bifunctional metal-acid sites. We also developed a new high-yield pathway from hemicellulose to 1,5-pentanediol via dehydration-hydration-hydrogenation [4]. Technoeconomic analysis showed that this technology produces 1,5-pentanediol at much lower cost than previous routes, resulting in the formation of a startup company, Pyran. 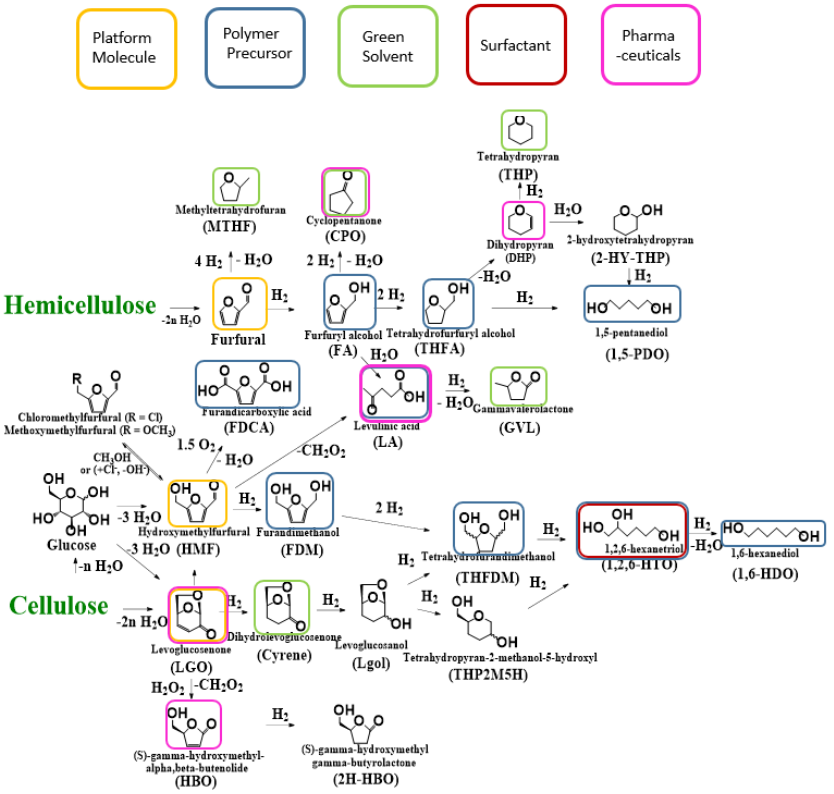 Our technology focuses breaking down lactose, a disaccharide poorly digested by 70% of the world, into two sweeter monosaccharides, glucose and galactose. This has been done by either enzymes or acid catalysts, but the high cost of enzymes has made the whey-to-sweetener process economically uncompetitive. Acid catalysis relies on cheaper catalysts, but the prevalence of side reactions causes the Greek yogurt acid whey to turn an unsightly brown color. We have employed various filtration steps to purify the Greek yogurt acid whey, leading to improvements in the yield of glucose and galactose and decreases in the brown color developed during the reaction [1,2]. We are currently developing a flow system capable of continuously reacting the lactose in the Greek yogurt acid whey. In the future, we seek to develop a catalytic process that could react the lactose in dairy streams without the need for any filtration.

Olefin oligomerization is a promising technique to synthesize linear alpha olefins (LAOs) which are the precursors of polyethylene, plasticizers, and surfactants. Industrial applications of synthesizing LAOs usually involve homogeneous catalysts, which often require activators and extra purification steps. Here, we are able to synthesize heterogeneous carbon supported cobalt catalysts which are very selective to linear olefins. The oligomerization mechanism was found to be Cossee-Arlman since the product distribution follows the Schulz-Flory distribution. For ethylene oligomerization of carbon supported cobalt catalysts, we managed to obtain above 80% linearity of octenes at 32% ethylene conversion. Our past work suggested that increasing the nitrogen pretreatment temperature improved the oligomerization activity. In our latest publication in ethylene oligomerization, an addition of chromium to cobalt improved the catalyst activity and stability. Our current research is investigating these catalysts as potentials to synthesize diesel or jet fuel.